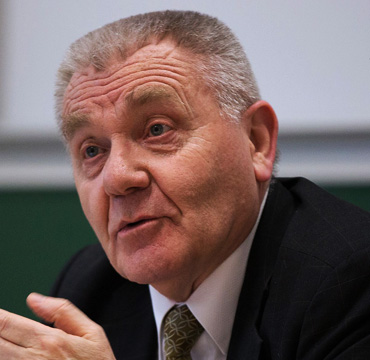 Jean-Pierre Bourguignon was the Director of the Institut des Hautes Études Scientifiques (IHÉS) from 1994 till 2013. This international research institute located near Paris, France, was built as the European counterpart of the Institute for Advanced Study in Princeton. A mathematician by training, specialized in differential geometry and mathematical aspects of theoretical physics, he spent his whole career as a fellow of the Centre National de la Recherche Scientifique (CNRS). He held a Professor position at École polytechnique from 1986 to 2012. From 1990 to 1992, he was President of the Société Mathématique de France and President of the European Mathematical Society from 1995 to 1998.

He is a former member of the Board of the EuroScience organisation (2002-2006) and served on EuroScience Open Forum (ESOF) committees from 2004 to 2013. He received the Prix Paul Langevin in 1987 and the Prix du Rayonnement Français in Mathematical Sciences and Physics from the Académie des Sciences de Paris in 1997. He is a foreign member of the Royal Spanish Academy of Sciences. In 2005, he was elected honorary member of the London Mathematical Society and has been the secretary of the mathematics section of the Academia Europaea. In 2008, he was made Doctor Honoris Causa of Keio University, Japan, and, in 2011, Doctor Honoris Causa of Nankai University, China.

Session: Learning to Lead: What Capacities do Scientists of Tomorrow need?