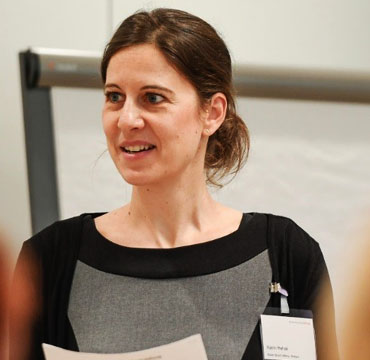 Dr. Katrin Rehak-Nitsche is Head of Department Science and Research of the Robert Bosch Stiftung, one of the major German Foundations associated with a private company and founding partner of NEF. Amongst others, she is responsible for the topics “Research for Sustainability”, “Transformative Urban and Rural Spaces” and “Networking and Promoting Science””.

Katrin Rehak-Nitsche holds a PhD in Geology and conducted her research at different universities such as Potsdam, Stanford and Edinburgh. From 2009 until 2014, she worked for the Helmholtz-Gemeinschaft, the largest German research organization, lastly as Head of “Science Policy” at the Head Office in Berlin. Her particular interest lies on building bridges between science and society by involving as many parts of the society as possible. Through her work, she wants to inspire discussions when critical perspectives are lacking, empower people to generate societal impact and bring together people with different views who strive for the same goals.

Session: Learning to Lead: What Capacitates do Scientists of Tomorrow Need?