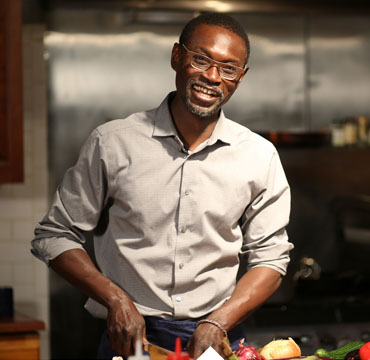 Pierre Thiam is a celebrated chef, restaurateur, cookbook author, and entrepreneur. Born and raised in Senegal, he is known for his innovative cooking style—at once modern and eclectic yet rooted in the

rich culinary traditions of West Africa. His second cookbook, Senegal: Modern Senegalese Recipes from the Source to the Bowl was a finalist for the 2016 James Beard Award.

Chef Thiam is co-founder of Yolele Foods, a company that advocates for smallholder farmers in the Sahel by opening new markets for crops grown in Africa such as the forgotten ancient grains fonio, which is presently distributed at Whole Foods and Amazon under the Yolele label. His TEDTalk on fonio during the 2017 TEDGlobal conference in Arusha has been viewed over than 900.000 times.

Through his advocacy and many media appearances (most recently on CNN’s Parts Unknown with Anthony Bourdain), Chef Thiam has become known as a culinary ambassador, dedicated to promoting West African cooking throughout the world. He is based in New York.