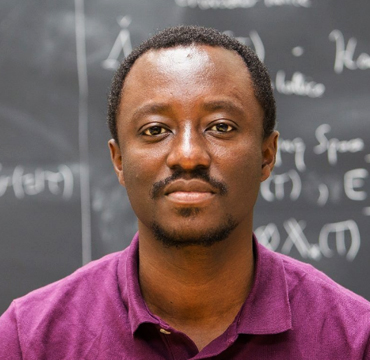 Dr. Prince Osei is the Project Developer for Quantum Leap Africa (QLA) and a researcher in Quantum gravity. His alma mater is University of Ghana, where he obtained a BSc, MPhil and PhD degrees in Mathematics. He was awarded the first PhD in mathematics by the university after 65 years. Prince was the Manager of academic program for AIMS-Ghana for its first three years before joining Perimeter Institute in August 2015 as a Fields-Perimeter Postdoctoral fellow. Since 2007, he has been a lecturer at the department of Mathematics, University of Ghana.

His primary interest is in quantum algebra and an algebraic approach to problems in quantum gravity – in particular, he is interested in the role of quantum groups in noncommutative geometry and topological quantum field theory. He’s also recently been interested in topological quantum computing, an area he is exploring more in his new role at QLA.